Click the Photo Above to See All Photos of This Bridge!
The Union Pacific Railroad of today has been formed of four railroads named Union Pacific. The first company was incorporated on July 1st, 1862, under the Pacific Railroad Act of 1862. Approved by President Abraham Lincoln, the goal was to connect the Missouri River from Council Bluffs, Iowa to San Francisco Bay. While construction delayed until 1865, a first 300 miles of mainline were completed across the flat Nebraska prairie by 1866. Another 240 miles were built in 1867, and 555 more in 1868-69. Another railroad, known as the Central Pacific Railroad was building east from San Francisco. The two lines met at Promontory Point, Utah on May 10th, 1869. Until 1872, there was no bridge across the Missouri River at Omaha. In 1874, Wall Street speculator Jay Gould took control of the Union Pacific. In 1880, he merged the Union Pacific and the Kansas Pacific to form the Union Pacific Railway, the second company by this name.

The Kansas Pacific Railway was formed as the Union Pacific Eastern Division in 1863, with a goal to build from Kansas City to Fort Riley, Kansas. The route was motivated by the United States Government to settle disputes between settlers in the area and connect to Fort Kearny, Nebraska. Construction began in September of 1863, and the first 40 miles opened to Lawrence the next year. In 1866, the town reached Junction City, and reached Salina in 1867. The name was changed to the Kansas Pacific Railway in 1869. A second phase was planned to reach Colorado, and construction began in October of 1869. Kit Carson, Colorado was reached in March of 1870, and Denver was reached the following year.

The Union Pacific Railway, the second rebirth of a railroad with this name began operations in 1880. This railroad built some new lines throughout the Nebraska and Kansas region, as well as further west. The railroad was short lived, and quickly filed for bankruptcy just 13 years later. After the bankruptcy, a third Union Pacific was born in 1897. Renamed the Union Pacific Railroad, the route took over the routes of its predecessors. A majority of modern Union Pacific came from the third incarnation, which did serious upgrades to many mainlines and routes. The railroad remained highly unchanged in terms of overall service and the areas served. 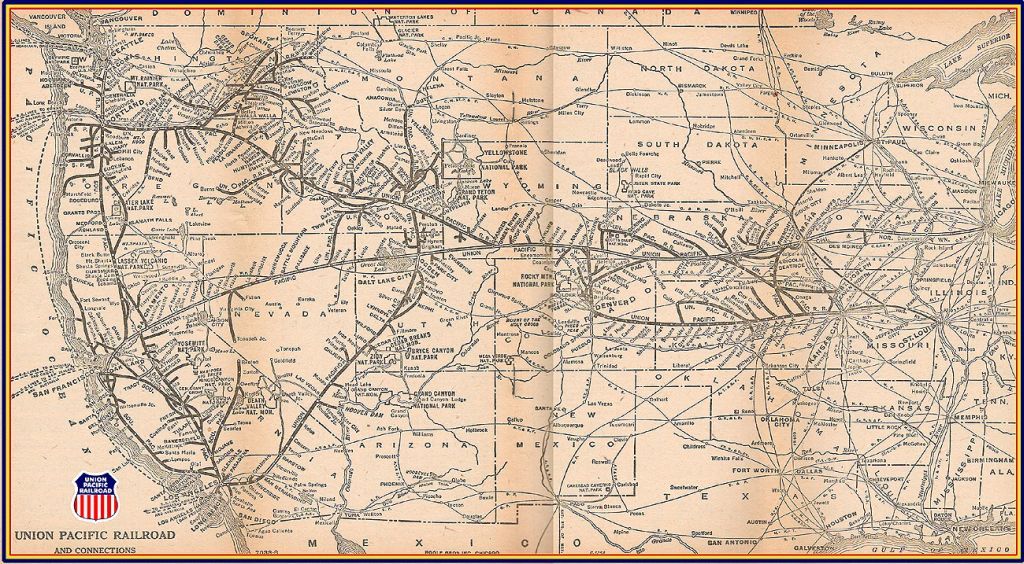 Map above credit of Railroad Picture Archives. The map shows the limited amount of trackage in the 1952 Union Pacific system.

Union Pacific began to expand after World War II. They purchased railroads such as the Missouri-Kansas-Texas Railroad in 1988, as well as the Chicago & North Western Railway in 1996. The railroad merged with Missouri Pacific Railroad and Western Pacific Railroad to form the Pacific Railroad Companies in 1983. This third Union Pacific lasted until 1998, when a merger with rival Southern Pacific expanded the route miles vastly, particularly out west. A fourth Union Pacific Railroad was formed at this time. Also as part of the merger, the St. Louis Southwestern Railway and the Denver and Rio Grande Western Railroad were merged into the system. In addition to purchasing other railroads, Union Pacific acquired a number of former Chicago, Rock Island & Pacific Railway lines through C&NW and SSW. Other lines also would be purchased, such as routes running through Illinois on former Chicago & Alton trackage. This route was initially purchased by the Southern Pacific. Many of these purchased routes have been rehabilitated and are now key pieces to the railroads operations. 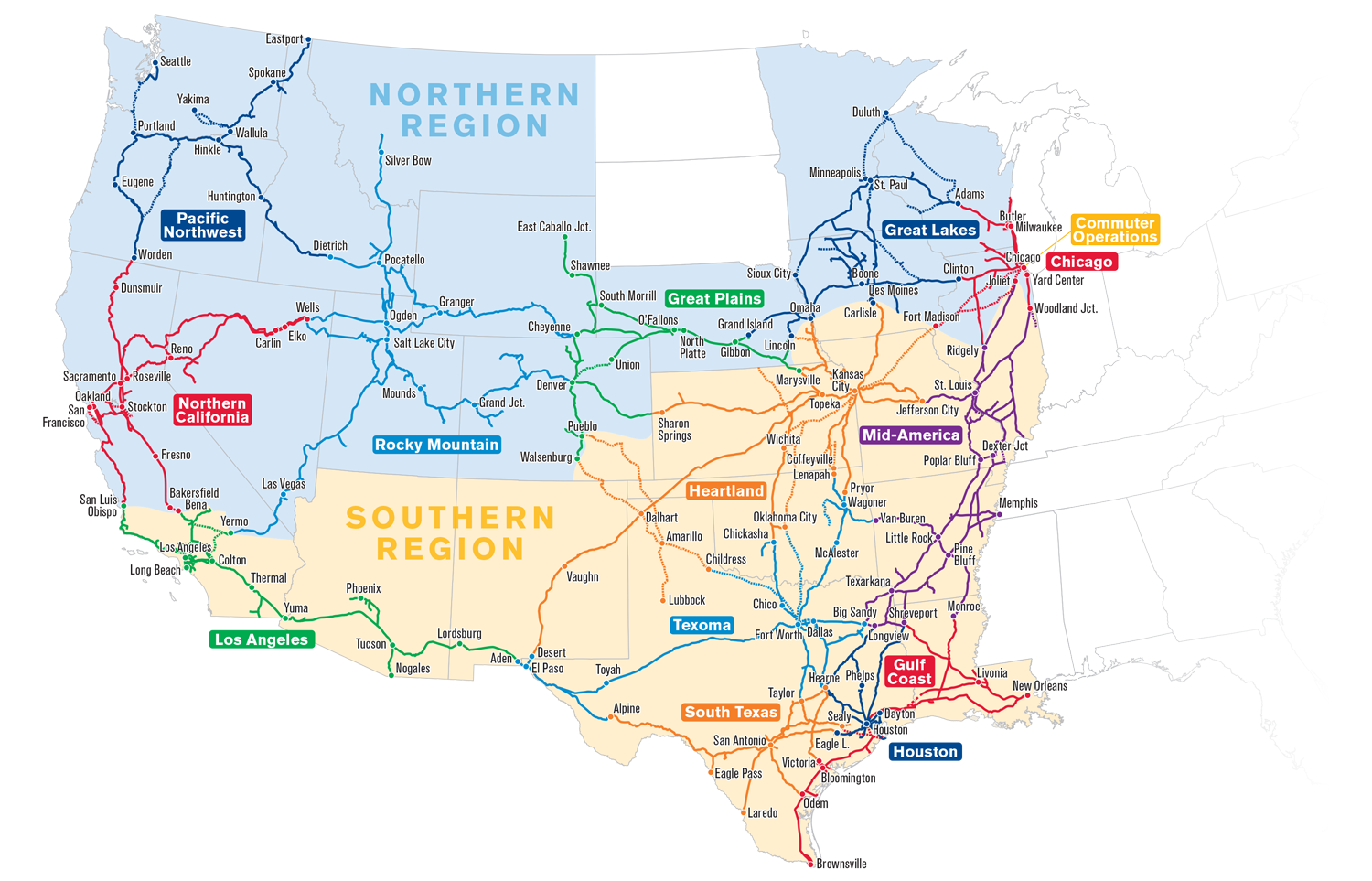 Map above credit of Union Pacific Railroad. The map shows how much the railroad has expanded since 1952.

Historically, all four incarnations of the Union Pacific Railroad have been considered as one railroad, despite being separate companies with different leaders. Union Pacific has a rich history, which has been wonderfully preserved through programs and museums. Now headquartered in Omaha, the railroad is the largest in North America, barely surpassing BNSF Railway. The present Union Pacific operates primarily in the western half of the United States. The mainline extends as far east as Chicago, but does not reach into Indiana. Through mergers in the 1980s and 1990s, much of the present Union Pacific system was at one time paralleled by another railroad that was once a predecessor to the modern Union Pacific. This is especially true in the midwest, where competing lines allowed agricultural goods to move efficiently. Now operating over 32,000 miles of railroad route, the Union Pacific continues to be one of the most recognizable and historic railroads in America.
On this site, the majority of bridges on this side trace roots back to the C&NW, which added 5,000 miles in Minnesota, Iowa, Wisconsin and Illinois to the site. At the time of the purchase, the South Dakota trackage was removed from the C&NW system. Because of the varied history, many types of bridges exist. The Quadrangular Lattice through truss is the most common truss type along former C&NW and UP lines, while other types of stone arches and girders are also equally as common.

A selection of photos above shows bridges both built and currently owned by the Union Pacific Railroad. The photo above is the Missouri River Bridge at Omaha, a critical piece of infrastructure on the system.